Take a YouTube tour of the Gunn Memorial Library prepared by our own Library Assistant, Abigail Roberts.  Abigail has been familiar with the Gunn Memorial Library starting with Children’s Story Hour with Miss Martie.  When in Middle School Abigail volunteered in the Junior Library working with Miss Linda on Thursday afternoons with second and third graders; and on Saturdays helping with Kids programs.  In 2015 Abigail  offered to volunteer again, but was hired to work in both the Adult Library as well as the Junior Library.  Abi’s long-range plan is to obtain her BA in Library Science.  In the process of obtaining that goal she has taken a library technology course, and for her class project she produced this video, which met the assignment of creating a library commercial.

This level comprises the original main rooms of the 1908 library. It is rich with architectural detail typical of public buildings built at the turn of the last century. Quarter-sawn oak paneling, pilasters, and dentil moldings define the rooms. An exquisite gilt-accented ceiling mural by H. Siddons Mowbray lights up the old lobby; a carved stone memorial chimney breast graces the Reading Room and a memorial stained glass window, restored in 2010, now gives view to the atrium and circulation desk below.

Wykeham Room and Reading Room
Thanks to major seed money given to the Library when Wykeham Rise School closed, our Capital Campaign in the early 1990s got off to a strong start. The school’s Trustees felt that the Library would be an ideal place for alumnae of the school to visit in Washington; and so, this area displays a variety of photographs of students and their activities at Wykeham Rise throughout the years.

Lectures, slide shows, and discussions co-sponsored by the Library or Museum take place in the Wykeham Room. More intimate book discussions are usually held in the adjacent Reading Room.

Click here to read about former board President, Jane Boyer’s discoveries about the history of the original library. 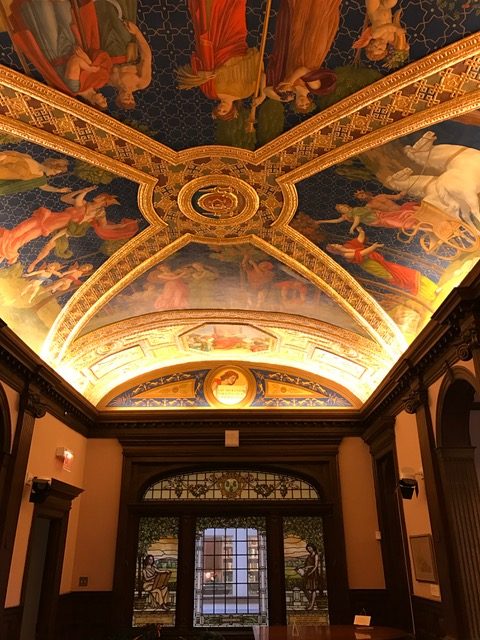 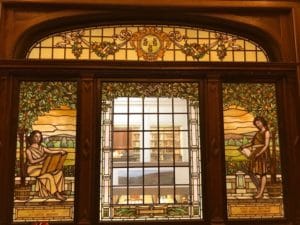 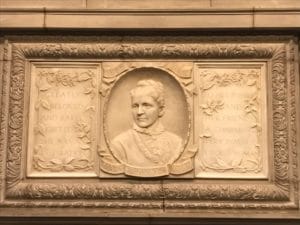 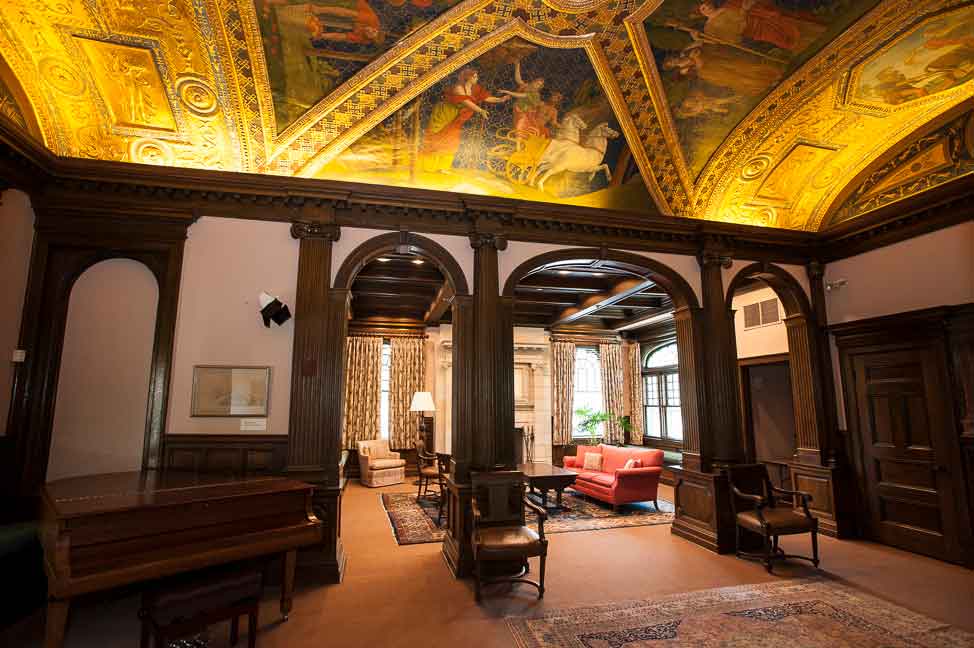 Mowbray Mural
The most prominent feature of the upper level and the crowning glory of this library is the beautiful Mowbray Mural on the ceiling in the lobby area between the Wykeham and Reading Rooms. Unveiled on July 4, 1914, the grand ceiling mural was donated by the muralist and painter, H. Siddons Mowbray, in memory of his wife. Mowbray’s work also graces the Morgan Library, the University Club Library, and the Appellate Court House in New York City. More of Mowbray’s work can be seen in St. John’s Episcopal Church nearby.

This vaulted ceiling mural is divided into in four panels that depict the Greek myth of Proserpine, daughter of Ceres, being abducted by Pluto. The four seasons are represented, along with end-panel quotations from Emerson. 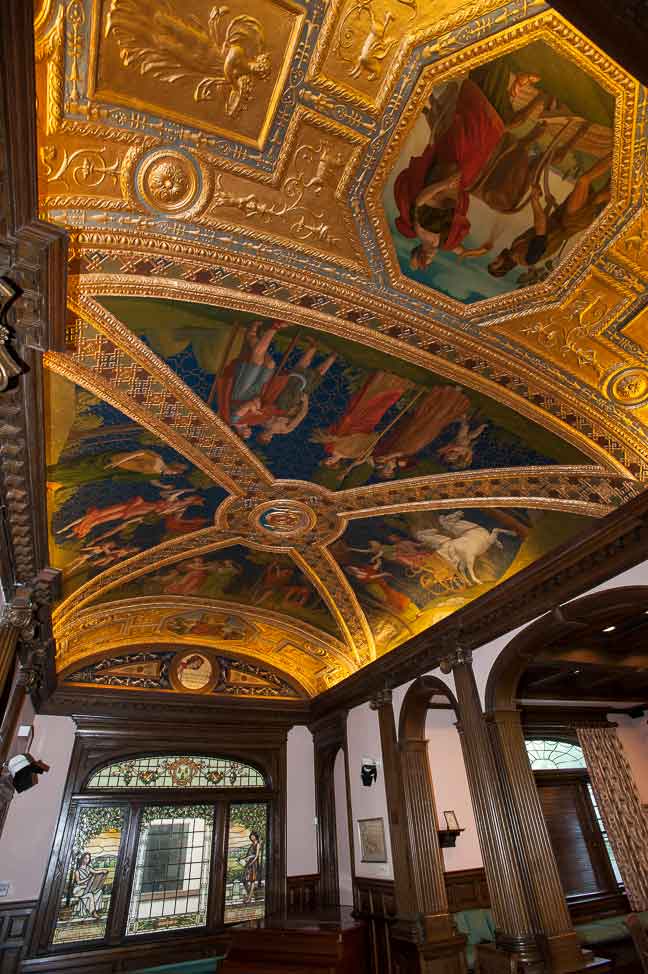 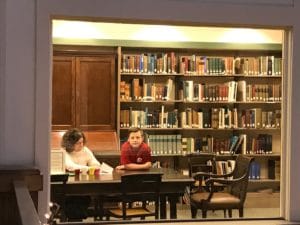 Adult Library
Upon entering the adult library, one cannot help but notice the circulation desk. It was built to last by Seth Price, local cabinetmaker and former Gunnery student. An inspirational quote of Mr. Gunn’s is inscribed in the center panel of the cherry desk by renowned carver, Brooke Roberts: “Feast richly on the noble and beautiful things contained in books.” Paintings by H. Siddons Mowbray adorn the walls that flank the circulation desk. 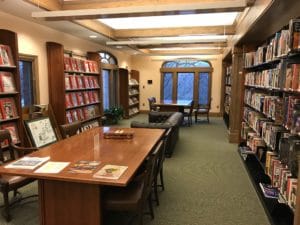 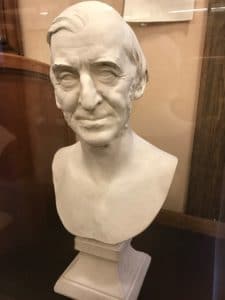 Staff Offices
Our staff and volunteers are always busy at work. Half of the staff room used to be the entire Children’s Library — about a third of the size of the current one. Now this space is used to catalog and process materials, repair damaged items, pay bills and plan events and fundraisers.

Junior Library
The 1994 addition to the Library constituted the greatest gain in space for the Junior Library. A separate room is reserved for various programs and story times. The junior library circulates an ever-increasing number of materials and is a hub of excited activity and quiet wonder as it continues to introduce new generations to the charms of reading. The computers in the junior library offer games, databases to assist with research, and access to the Internet. 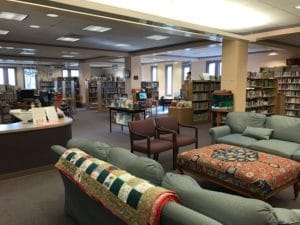 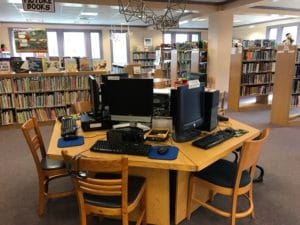