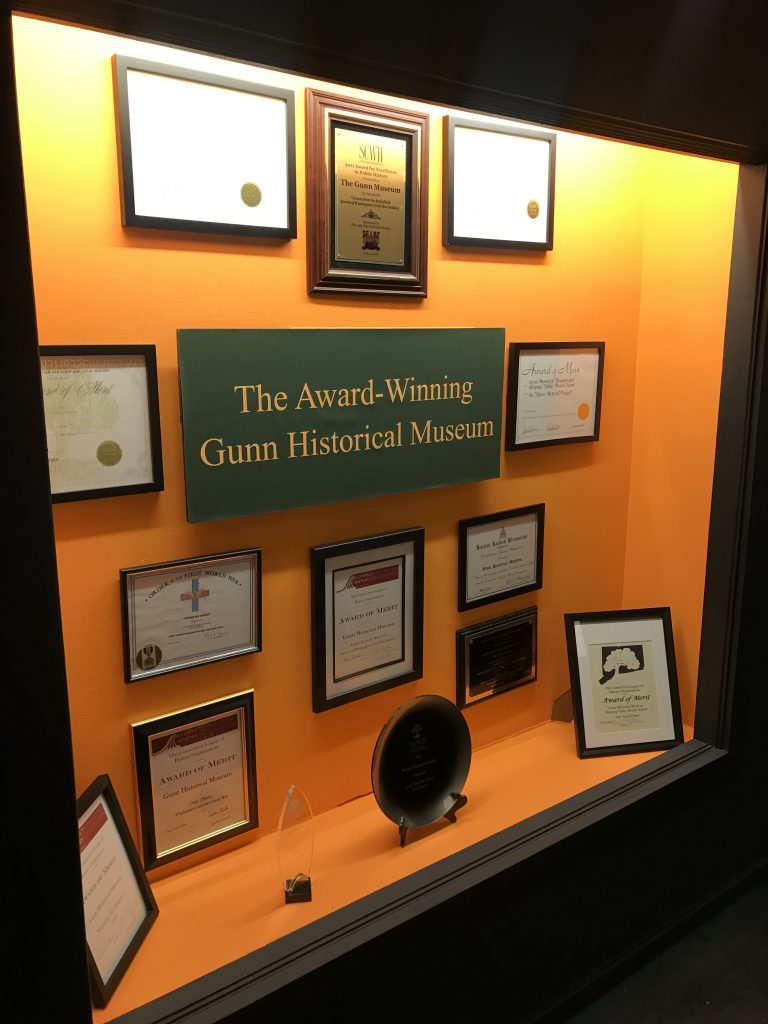 The AASLH Leadership in History Awards, now in its 75th year, is the nation’s most prestigious competition for recognition of achievement in state and local history. The AASLH awards program was initiated in 1945 to establish and encourage standards of excellence in the collection, preservation, and interpretation of state and local history throughout the United States, and the winners represent the best in the field. By publicly recognizing superior and innovative achievements, the Leadership in History Award winners serve as models and inspiration for others in the field.

2020 Award of Merit from the Connecticut League of History Organizations

The Connecticut League of History Organizations presents Awards of Merit to institutions and individuals who demonstrate the highest of professional standards, and who enhance and further the understanding of Connecticut history. The purpose of the Awards of Merit is to recognize the care, thought and effort invested in these contributions and to inspire and encourage others by acknowledging exceptional contributions to state and local history. The mere fulfillment of routine functions does not justify an award. Action over and above the ordinary call of duty is prerequisite for an Award of Merit. The CLHO Awards Committee said they were “impressed with the Gunn Museum’s well-developed research process and involvement of the community in formulating the exhibition’s content. The result was a thoughtful, comprehensive history of the town of Washington that connected this one place with the larger American story in meaningful ways.”

Graphic Design USA (GDUSA) is a leading organization for the design industry whose mission is to identify and showcase best practices and exemplary design in all forms. Headquartered on Fifth Avenue in Manhattan, GDUSA highlights organizations who have demonstrated design excellence on a national level. Since 1963, they have sponsored competitions that spotlight areas of excellence for creative professionals, honoring outstanding work of all kinds and across all media. Their competitions focus on the many ways that graphic design shapes business and society, commerce, culture, and causes. Of the 10,000 entries submitted in 2019, a highly selective 10% were chosen as a winner. The Gunn Historical Museum’s exhibit Washington Connecticut – An American Story, created by design agency SandorMax, was awarded the 2019 GDUSA Design Award for Exhibit Design excellence.

Gunn Museum is Awarded Good to Great Grant in 2016

The museum was chosen as one of 20 recipients of the state of Connecticut Department of Economic and Community Development’s Good to Great Grant of $100,000 which funded the Washington, Connecticut: An American Story exhibit that opened in 2019. This new long-term exhibit highlights the unique people, places, and stories that have shaped Washington’s rich history.

The Gunn Historical Museum received The Michael Kammen Award, a prestigious national award with a $5,000 prize, and a Leadership in History Award, for the 2014 exhibit “Over There: Washington and the Great War” at the Annual Conference of the American Association for State and Local History (AASLH) in Detroit, Michigan on September 16, 2016. The AASLH Leadership in History Awards is the nation’s most regarded competition for recognition of achievement in state and local history.

The Gunn Museum was presented the prestigious Bruce Fraser Award for its 2014 exhibit, “Over There: Washington and the Great War,” by the Association for the Study of Connecticut History (ASCH) at their annual conference. Peter Hinks, ASCH Award Committee Chair, praised the Gunn Museum for “their outstanding public history exhibition which recounted with depth and drama the significant place Washington, a little town in Connecticut, occupied in the world’s Great War; and was created with a minimal budget and remarkably resourceful curating and community collaboration.”

The Gunn Museum was presented with an Award of Merit by the Order of the First World War in 2014 and another by the Connecticut League of History Organizations in 2016 for its commemoration of the centennial of World War One in 2014 with the exhibit Over There: Washington and the Great War.

The Gunn Museum was recognized for the exhibit and program series, Coming to America: Washington’s Swedish Immigrants. This innovative work was created in 2013 to commemorate the 125th anniversary of the Swedish Salem Covenant Church in Washington Depot and garnered two awards: an Award of Merit from the Connecticut League of History Organizations; and a Leadership in History Award from the American Association for State and Local History at the Annual Conference in St. Paul, Minnesota on September 19, 2014.

The Gunn Museum was recognized for its commemoration of the sesquicentennial of the Civil War in 2011. The exhibit, Letters from the Battlefield: Stories of Washington’s Civil War Soldiers, was created by Museum staff and volunteers and incorporated a scholar lecture series as well as a social studies project with the 8th grade students of Shepaug Valley Middle School. This innovative work garnered three awards:

The Gunn Museum and Shepaug Valley Middle School were presented a WOW Award and a Leadership in History Award from the American Association for State and Local History (AASLH) at their Annual Conference in Indianapolis, Indiana, and an Award of Merit from the Connecticut League of History Organizations. Shepaug Valley Middle School students under the leadership of their eighth Social Studies teacher, Michael Croft, transcribed and researched the Civil War letters of Washington resident Abner Mitchell, published a book of their work, and created an exhibit at the Gunn Museum. The WOW Award, given at the discretion of the AASLH Awards Committee, is an additional award for an Award of Merit winner whose nomination is highly inspirational, exhibits exceptional scholarship, and/or is exceedingly entrepreneurial in terms of funding, partnerships, or collaborations, creative problem solving, or unusual project design and inclusiveness. The Gunn Museum and Shepaug Valley Middle School received one of the five WOW Awards presented across the country in 2009.

Click on the embedded links to learn more about the awards.