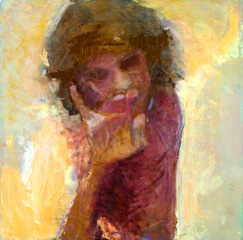 A new collection of paintings by renowned portrait artist Susan Kapilow will be on display at Gunn Memorial Library’s Stairwell Gallery in Washington, CT from July 14 through August 28. There will be a socially-distanced reception to meet the artist on Saturday, July 17 from 12 to 2 P.M.

Kapilow, who now lives in Roxbury, studied drama at Hofstra University. While still a teenager, she was cast in the original two-act production of Arthur Miller’s “A View from the Bridge” at the Sheridan Square Playhouse in New York City. She went on to play other roles in Charles Ludlam’s Ridiculous Theatrical Company as well as roles at the Manitoba Theatre Center, including Roxanne in “Cyrano de Bergerac.”

In the late 60’s, she became interested in sculpture and eventually won a scholarship to study sculpture at the Academia Delle Belli Arte in Florence, Italy based on a portrait sculpture she did of rock star Jim Morrison.

Over the years, Kapilow’s interest turned to painting and she became a prominent portraitist in New York. She was commissioned by the US Federal Government to paint the official portrait of Dona Shalala, the Secretary of Health and Human Services under the Clinton administration.
She has painted several portraits including the children of Tom Cruise and Nicole Kidman as well as the children of Warren Beatty and Annette Bening.

New York galleries that have exhibited her work include the Susan Blanchard Gallery and the Schlesinger Boissante Gallery.

A new collection of landscape paintings by celebrated Connecticut artist Dennis William Stuart will be on display at the Gunn Memorial Library Stairwell Gallery in Washington, CT from September 4 through October 16.

Stuart’s work, which has been nationally recognized, is largely influenced by the farms, fields, forests and brooks of Litchfield County. “I attempt to capture a moment in time revealing a contemplative interpretation of nature,” says Stuart, whose painting career spans 40 years.

For further information, please call (860) 868-7586 or email gunncirc@biblio.org. The Gunn Memorial Library is located at 5 Wykeham Road at the juncture of Route 47 opposite the Green in Washington, CT. For library hours and to learn more about Gunn’s programs and events visit gunnlibrary.org.

Receive weekly notices of additions to GML's collection with Wowbrary.